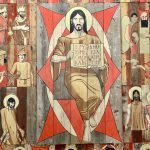 Back in the days when I was a United Church of Canada minister, I used to dread having to preach on Transfiguration Sunday. The reason I found it so uncomfortable is because this story is so obvious and clear in terms of what it’s trying to tell us.  It’s so straightforward, so blindingly obvious, that it doesn’t allow for much nuance; it resists interpretation, and spiritualization; it resists being turned into a metaphor.

It’s as though the blinding light of transfiguration leaves no room for shadows, no places to hide. It’s a story that confronts us with a particular truth claim about Jesus: that Jesus is the Messiah and Son of God. And this truth that it’s being so stubbornly clear and transparent about, is a truth that we have a hard time hearing, a hard time making sense of, as people who live in the modern era.

Back when I was a United Church minister, I felt like it was my duty to protect the flock from the more demanding claims of Scripture. I felt like it was my responsibility to offer interpretations, and metaphors, that would take the edge off stories that seemed to confront us—that it was my duty to make the Bible, and Jesus, fit more comfortably with the expectations of the good folks who came to church on Sunday. That it was my job to make it all safe, and sensible, and agreeable with the way we live now.

It’s as though the role of the minister was to be a kind of electrical transformer, taking the raw high voltage energy of Scripture, and converting it down into a safely usable form that couldn’t hurt anyone.

I used to feel that way. But then I went through this process of conversion that landed me up here. Now that I am an Anglican minister, I no longer feel like it is my job to protect you from the demands of Scripture and the claims of the gospel. Aren’t you relieved to hear that?!

Part of what I have been converted to is a deeper trust in the power of Scripture, in particular the Gospel, to speak for itself, to say what it needs to say, without a whole lot of mediation or interpretation or shaping by me. It means listening receptively to Scripture, first and foremost; rather than rushing in with a set of preconceived expectations that we overlay on top of Scripture, or limitations that we set around it.

This also involves a shift of position for me as a preacher. So instead of being the transformer, standing between you and Scripture, acting like a protective shield; instead I stand with you, among you, and together we are confronted by Scripture, and together we hear its demands on us, and together we fashion our response. Together we ask, how do we live in light of what this story is telling us?

So let’s look at this story of Transfiguration together. As I said, this story is telling us plainly and clearly that Jesus is the Messiah and Son of God.

In the Gospel passage you could hear the echoes of the Old Testament story of Moses going up Mount Sinai to receive the tablets of the Law from God. There is the mountain, and the cloud, and the voice from the cloud. We’re meant to see Jesus as a new Moses, a new lawgiver. But wait—there’s more!

Because then Moses and the prophet Elijah appear, and in the imagery of the Bible, we’re meant to see that Jesus is more than a new lawgiver, he is the fulfillment of the law and the prophets, the summing up in one person of the whole relationship between God and the people of Israel. But wait—there’s more still!

Because then the voice from the cloud speaks—the voice of God, the same voice that spoke at Jesus’ baptism—and says, “This is my Son, the beloved; with him I am well pleased; listen to him!”

Transfigured Jesus on the mountain shines like the sun with dazzling brightness because he is none other than the Messiah, the Son of God. As I said earlier, it’s a story that resists nuance; it resists being made to mean something other than what it says straight out.

And yet I think that many of us still try awfully hard to resist the truth that this story is trying to tell us. We no longer believe in the miraculous. Or maybe we half-believe, maintaining a nostalgic affection for the myths of our faith that we first learned in Sunday School. That’s where the epistle reading, from 2 Peter, challenges us: “For we did not follow cleverly devised myths when we made known to you the power and coming of our Lord Jesus Christ, but we had been eyewitnesses of his majesty;” and he goes on to give his account of the Transfiguration. It really happened, Peter says—I was there!

But still we struggle to believe. And for the past fifty years in much of the Anglican and United Churches, we’ve been taught that it’s okay not to believe; that maybe Jesus was just a man—a very good man, a very wise man, a teacher and healer and friend of the poor, and that our job as Christians is to imitate Jesus. But what if it’s actually much more than that? What if the story really is true, that Jesus really did shine like the sun because he is the Son of God, God incarnate?

Last week, Chris was telling us that over the past fifty years the number of people participating in our churches has been on a steady decline. What if these two things are related? What if our decreasing ability to believe in our story was related to a decreasing interest in the Christian faith? What if what we have been offering is just no longer strong enough to heal what’s broken in our world?

Let me say that this is not an argument for Fundamentalism or literalism; and it’s not an argument against doubt or questioning. Faith is often a process that is helped along by doubts and questions.

What I am arguing for is a space for belief. For taking the stories of our faith at face value. That Mary really was a virgin, that the baby born to her really was God incarnate, as was the man who died on the cross and rose again on Easter morning.  These stories don’t meet our criteria of believability, so we try to turn them into something else—but doing so robs them of their power: their power to heal and to save, their power to set the world right again.

God knows we live in a world of terrific challenges: climate change, massive inequalities in income and wealth, the specter of racism, the scourge of nationalism, to name a few. And God knows that each one of us lives with terrific challenges in our own lives: a life-altering diagnosis, the end of a relationship, the loss of a loved one; worries about our children, worries about our future.

These are challenges that shake us to our core. And good advice, and wise words, and comfortable myths, aren’t enough to still the anxiety that steals in upon us when we find ourselves lying awake at two a.m.

The Gospel of Matthew has a particular name for Jesus. It comes from a prophecy from Isaiah: “Look, the virgin shall conceive and bear a son, and they shall name him Emmanuel.” Emmanuel is a Hebrew name that literally means, God-with-us: “emmanu-el,” with-us God. And both parts of that are important: because if Jesus is not God, then following Jesus isn’t going to be enough to get us through the challenges we face.

On the other hand, if God is some remote deity—out there and up there, and not here with us—well, we might imagine such a God to be indifferent to us and our concerns, leaving us to fend for ourselves.

But the story of the Transfiguration is a story of Emmanuel, God with us. What happens on the mountaintop is an epiphany, a revelation of the true nature of reality. We think we live in the world we see and touch and taste and feel and hear; we think that’s all there is, but on the mountaintop shining Jesus says, No, it’s not like that at all. God is with you; God is here, with you, right now. And God is with you at two a.m, too. Every bit as real—no, more real—than what we call reality.

God is with us. Thanks be to God. Amen.