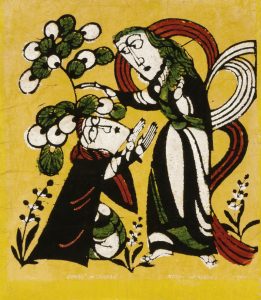 I speak to you in the name of God: Father, Son, and Holy Spirit. Amen.

This week’s gospel story is a story that is often considered to be difficult or controversial in our branch of the Christian family, the liberal protestant church. Although I think the best way to describe how this story is often treated by preachers in our church is to say that the story causes considerable embarrassment. And so preachers often go to great lengths to explain away the difficulties of the story.

The story is difficult, the story is embarrassing, because of what appears to be happening in the dialogue between a gentile woman—a foreigner—and Jesus. The woman enters the scene causing a scene, shouting to Jesus to save her daughter. But our real concern, our real embarrassment, comes as we witness Jesus’ response: at first he appears dismissive, then responds in a way that appears to be sexist and perhaps racist, xenophobic, before finally deigning to grant her request.

Is Jesus being a first class jerk?

It is for us a deeply embarrassing picture of Jesus, the Son of God, the Second Person of the Trinity, God incarnate. And so this is where all those apologetic explanations come in—to explain away what seems like Jesus acting like a first class jerk!

One of the most common ways of explaining Jesus’ behaviour in this story is to say that he is being a bit of a jerk, but that the woman’s persistence causes him to change his mind; that Jesus has a kind of epiphany here, which broadens his horizons and causes him to be less sexist and racist.

Personally I think this approach causes more problems than it solves. Firstly, it leaves in place this idea that Jesus could behave in a sexist or racist way, until he was corrected by this encounter. That’s hugely problematic, because Jesus is God, and we want to be very clear about not associating God with racism or sexism. There are all too many examples in history and today of Christian faith used in sexist and racist ways. But as Jane Bourcet made so clear last Sunday, racism—or any kind of discrimination—is not of God. God, and God-in-Jesus, is steadfastly opposed to any kind of sexism or racism.

The second issue I have with this approach is that I think it arises from our tendency to judge the Bible according to the categories of our modern political ideas and ideology. We live in a liberal democracy, with constitutional guarantees of non-discrimination. We cherish the great liberal idea that all people are created equal. We are rightly offended by sexism.

When we read Scripture from that perspective, well, then Jesus behaviour at the beginning of the passage is wrong, until he is corrected by the woman. And we are relieved that Jesus has been enlightened and has come around to our twenty-first century liberal ideas of not being sexist.

I think this approach is problematic because I think it reverses the appropriate order of things. It sets us and our ideas above Scripture, with authority over Scripture, rather than Scripture having authority over us. I recognize this is a controversial idea, but it comes down to which set of ideas are you going to put your faith in: Do you put your faith in the constitutional notion that all people are created equal?

Or, do you put your faith in the biblical idea that all people are created in the image and likeness of God? For me, the biblical vision is the more expansive vision; it’s a heck of a lot more inclusive than our current ideological commitments. To say that every person is created in the image and likeness of God is to allow zero tolerance, zero space for discriminatory treatment on the basis of gender, gender identity, socioeconomic status, national origin, any of those things. That’s the biblical vision.

I also believe that Scripture has authority over us because it is the word of God, and so it is more truthful than the words we come up with. But that’s for another day!

An unexpected model of faith

So what other options are available to us for reading this story? What struck me as I read the story this week is the power of the woman’s faith. Jesus commends her as a model of faith: ‘Great is your faith!’ he says; ‘Let it be done for you as you wish.’ This woman, this foreign woman, is held up as a model of faith by Jesus. Now for us this is not particularly shocking or surprising; we were more shocked by Jesus’ earlier behaviour towards her.

But if you think back to the first people who heard this story, the situation would have been reversed. They wouldn’t have been at all shocked by Jesus’ apparent rudeness to the woman, but they would have been struck dumb by that ending, Jesus holding her up as a model of faith.

One day Jesus was out beyond the borders, out in gentile country. And you can imagine the listeners’ ears pricking up—what’s Jesus doing there?

And then a gentile woman came up to Jesus shouting and screaming, and wanting Jesus to heal her daughter of a demon possession. And the listeners think: Really? Who the heck does she think she is—a woman, and a foreigner! Why should Jesus waste any time on her?!

And the disciples came to Jesus and said, ‘Get rid of that awful woman and her shrieking!’ And the listeners think: Yeah! Right! Get rid of her, Jesus!

And then the woman threw herself on her knees before Jesus, begging for his help. And Jesus, looking at the disciples, says, It would be like taking food from the children of the house and giving it to the family pet! And the listeners start to howl and cheer, Yeah! That’s telling her!

And the woman responds, I know that the food you give is powerful food, and I will do whatever I have to to get some for my daughter! And again, the listeners say, Oh! Go on! Get lost!

And Jesus says, Woman, how great is your faith. Let your wish be granted and your daughter healed.

And here, the first hearers of this story are gobsmacked. What just happened here? All through the telling of the story, they thought they were on Jesus’ side, or more accurately, that Jesus was on their side. They thought they knew where he was going with this, right up to the last moment.

It turns out that Jesus is not sexist or racist at all; but often we are. And Christians have often enlisted Jesus to back up our prejudices.

A theme of reversal

Now, my reading of this as a kind of parable is imaginative and speculative. But it draws on a theme that we can see throughout the gospels, in the story of the Good Samaritan, for example—where the holy people, the good people, ignore the person lying beaten at the side of the road. And the person you think of as the enemy, the villain, the one who is everything you are not—that’s the one who does what is right. And it’s a shock.

It’s a theme of reversal, where the supposed good people, the insiders, those closest to Jesus, fail the test of mercy; while those outside, the ones we look down our noses at, act with a purity of heart that immediately connects them to Jesus.

So, what do we do with this story? Well, I suppose it’s a reminder to us to act less like the disciples in the story, the folks who think they are on Jesus’ team, expecting Jesus’ to share their prejudices, policing the boundaries of Team Jesus.

And instead to be more like the Canaanite woman, not relying on our own righteousness, on our status, on our social connections, on the color of our skin or on our gender—but coming to Jesus deeply aware of our utter dependence on the food that he offers. Utterly dependent on that for our health, our salvation.

How would being more like her change us? How would it change how we are as a church?

We are all outsiders now

There’s a way in which, in this Covid-19 pandemic, that we are all like the Canaanite woman now: we are all outsiders—outside of our church, outside of our fellowship, so far distant from the Eucharistic table that we can’t even hope for crumbs.

This time in which we are pushed outside of all the things that functioned as cocoons for us can be deeply distressing. And to the extent that it is, we need to care for one another and be patient with ourselves. I think it can also be a time when we recognize the positive side of being stripped of the many layers of insulation that sometimes smother our truest selves.

It can be a time when we come to Jesus like the Canaanite woman, recognizing our deep need, and receiving from his hand all that we need for wholeness and life and health.

In the Name of the Father, the Son, and the Holy Spirit.