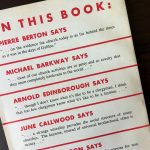 In this next series I’m going to take on what I think of as three of the major “sins” of the contemporary mainline church: relevant preaching, accessible liturgy, and pastoral care as a privilege of membership.

You may be surprised to hear this trio described as sins, given that they are normally set out as positive goals for mainline congregations—especially over the past half-century as churches have struggled to come to terms with the impact of secularization.

My view is that attempts to accommodate secularization have weakened our churches and hastened their decline. Accommodation has led to the complete opposite result to the one hoped for by advocates of accommodation.

The legacy of the Sixties

In the face of rapid cultural change, notably during the 1960s, theologians and denominational leaders in the mainline saw a need to move with the times, to stay relevant. This meant updating the language of the liturgy, preaching sermons that spoke to the issues of the day, and shedding the much of the culture of the church that seemed to separate it from the world outside its doors.

The church was to go out into the world, rather than remaining holed up in stained glass sanctuaries with clerics in fancy dress intoning incantations from dusty old tomes.

Church leaders seemed to fall head over heels in love with the world and all the exciting things that were happening in it. The world outside the church seemed so much more attractive than the world inside.

That was partly due to the fact that the mainline church of the post-war period was experienced as conformist and conventional and moralizing in an era of emancipation and liberation and revolution.

An attempt at reform Conformity made sense as a defining value in the 1950s as people sought to rebuild their lives and the world in the aftermath of decades of global economic depression and a world war. A decade later it no longer made sense and the search was on for a more fitting expression of church.

I am sympathetic to the motivation of those who sought to make the church more relevant in the cultural upheavals of the 1960s. They were trying to revitalize a moribund church and to inspire a Christian response to issues like nuclear disarmament, racism, sexism, poverty, and inequality.

In hindsight, though, I think they made some mistakes and we are living with the consequences of those mistakes today.

The fundamental mistake they made in my view was to identify the traditions of the church as a barrier to being the church in a new age.

Liturgy, language, doctrine, creeds, vestments and clericals—all had to be thrown off, cast aside, or trimmed to fit the spirit of the age. The church would no longer have need of its weighty inheritance of two millennia of life in and for the world.

I think the church in succeeding decades has doubled down on the choice to be relevant—rather than radical—because it is the less costly choice. Less costly for those in the church, but in the bigger picture it’s a strategy that may cost us the church, if current demographic trends continue.

It’s time for us to choose again. That does not mean going back to the pre-1960s church as if it were somehow better than what has followed. It does mean reassessing our situation in light of what we have learned over the past half-century.

It’s time to choose again, and to reexamine the claim that tradition is the problem. It’s time to consider again the neglected call for the church to be radical.

In the next post we’ll take a look at the first of our “sins”—relevant preaching.