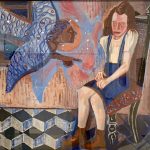 In this post we take a look at the second of our “sins” of the mainline church, the sin of “accessible” liturgy. A previous post examined the sin of “relevant” preaching, and a subsequent post will consider pastoral care as a membership privilege.

Some time ago I attended the consecration and installation of an Anglican bishop. Such an event, naturally, is a major occasion in the life of the church and a cause for much celebration.

It is an also an opportunity for Anglicans to show off one of the hallmarks of our tradition—an appreciation of liturgical beauty, expressed in a rich panoply of vestments.

At this particular gathering dozens of Anglican clergy assembled in the designated dressing area along with a handful of ecumenical guests. The scene was reflective of the diversity of the contemporary church, with a considerable range of opinion as to what constituted one’s “Sunday best.”

For those less comfortable with tradition, it meant dressing simply in a beautifully pressed cassock-alb and a favourite stole. Those with a somewhat nostalgic appreciation for the glories of the Anglican past overlaid their cassock-alb and stole with richly decorated copes. The few Anglo-Catholics present helped each other adjust the multiple layers of cassock, drawstring alb, stole, and cope, while everyone else looked on in good-natured bemusement.

The ecumenical guests were mostly dressed in secular professional attire. As their eyes travelled over the rich and complex array of items emerging from Anglican garment bags, they seemed to navigate a route between studied disdain and suppressed envy.

Does tradition have a future?

Also on full display that evening was the contemporary church’s ambivalence about liturgical tradition.

This conversation has its roots in the tumultuous decade of the 1960s when books like Pierre Berton’s The Comfortable Pew unleashed a massive and consequential debate about the mainline church’s relationship to society.

One of the key critiques of The Comfortable Pew and similar works was that the church was just too “other-worldly” and that it ought to be more “this-worldly.”

Out with the old

All of the things that marked the church out as distinct from the culture were seen as problematic. This included the language used in worship, the doctrines expressed in creeds, the special dress worn by worship leaders, the content of biblical stories, and the topics addressed in sermons.

Churchy jargon needed to jettisoned, along with unbelievable claims about Mary’s virginity and Jesus’ bodily resurrection. Clerical collars and vestments were anachronistic and unredeemably hierarchical. Scripture stories needed to be brought into the present and translated into contemporary idiom so that they could be of more use to the congregation.

Relevance became the rallying cry for many liturgical reformers in the church. There was some justification for this, in that it was partly motivated by a desire to see the church become more active amidst the social turmoil, to heed the calls for justice that emerged in that era.

But as in other areas, I think the move towards relevance in liturgical matters was overplayed.

Ever since that time, over the past half-century, liturgists in the mainline church have seemed obsessed with the question of relevance in the liturgy. Ostensibly, the purpose of all of this is to make worship more accessible to the general public, to make the church more appealing to those who no longer attend.

It was believed—and continues to be believed—that erasing any distinction that remained between life in the church and life in the world would draw more people to the church.

Prayers and hymn lyrics have been modified to remove what is regarded as inappropriate language; words like “Lord” or references to God as King or Father. Creeds have been removed from the liturgy altogether, or replaced with formulas that don’t risk offending contemporary sensibilities. Vestments and clericals are seen as indicators of a reactionary clericalism.

The great doctrines of the church are seldom mentioned, and preaching ranges from feel-good spiritual affirmations, to lectures on politics, economics, or sociology, or to edifying descriptions of the nature of God.

So much of the church’s power to save has been stripped from the liturgy, or so tightly constrained by an ideological commitment to inoffensiveness that it can barely be detected.

And for what? Has it worked? Has the desire to accommodate the culture by speaking its language and abandoning our own achieved its purpose of making the church more relevant or attractive to contemporary culture? It doesn’t look like it.

When I think back to that bishop’s consecration what remains most vivid for me are the relics of ancient tradition: the bishop thumping on the cathedral door with her staff, claiming her church; the grand procession up the aisle, culminating with the bishop seated in the throne-like cathedra.

At the time I thought about conversations with younger family members who spoke of arranging their weekends around watching episodes of Game of Thrones. I thought about the books they read and the movies they watched: fantasy, sci-fi, vampire tales. All of it other-worldly, rather than this-worldly.

It seems to me that younger people—and the culture as a whole—are instinctively drawn to the power of other-worldly stories, of myths and magical worlds. The kinds of stories you find in the prophets, or in the gospels, or in the Revelation.

And yet we in the church keep working at de-mythologizing and dis-enchanting the world of the Bible and, by extension, the world we live in.

I also think about my Boomer generation contemporaries who speak with reverent awe about their encounters with First Nations cultures. They rhapsodize about origin stories and ancestral lore and teachings that connect all of life and the Creator in one great web.

Yet talk with the same people about the opening chapters of the Book of Genesis—“then the Lord God formed man from the dust of the ground, and breathed into his nostrils the breath of life; and the man became a living being”—and you are liable to be met with high-minded derision for simplistic folk tales that reveal the limitations of their pre-modern authors!

Power in the weirdness

I’ll confess—there was a time when I belonged to the “make worship more accessible” school. But now I am firmly convinced that the power of the church—the power to transform lives—is in the weirdness.

It’s we humans who are so determined to drain the magic, the mystery, the miracle out of everything and replace it with our dull, disenchanted ordinariness. That’s precisely what we need saving from!

So let us tell our stories in their full weirdness. Let us keep our rituals that carry the echoes of long-disappeared worlds. And let us attend to our strange and mysterious God who still longs for us to hear his voice.